In most of the world, electrical plugs and sockets (outlets, points) are termed male and female: the male is the one with the prongs, the female with the receptacles for the prongs.

French electrical plugs & sockets (points) are different from all others: they're hermaphroditic (prongs in both plug and socket).

Note how the plug has a hole to receive a prong, and the socket/outlet/point has a protruding prong. This is the ground (earth) connection, recommended but not essential for most small appliances. (The ground/earth prong carries no electricity; it acts as a safety in case of a short circuit.)

You'll need an adapter to fit Euro, UK and North American plugs into French sockets—and you probably have more than one electrical device (phone, camera, e-book reader, electric toothbrush, etc.) to plug in.

Although the voltage in North America, the Caribbean, Japan, some South American and Pacific contries is 100-120 volts, 50 or 60 Hertz, most modern electronic devices (smartphones, tablets, computers, camera and e-watch battery chargers, etc.) can use any voltage from 100 to 240.

Look on the label, or in the device instructions, for the specification. If it includes voltages from 100 or 110 to 240, you can plug it into a French outlet. (If it is rated only at 100-120 volts, you will need a transformer to adapt it to French voltage.) 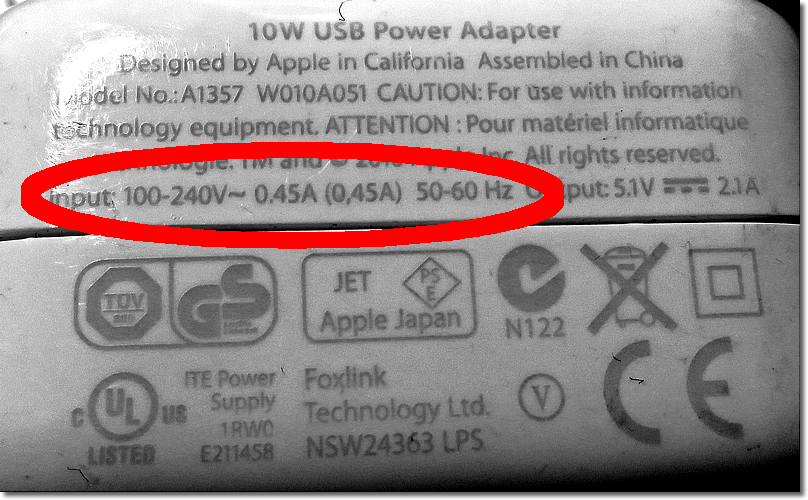 A large multi-adapter accepts North American, UK & Euro plugs, and fits into French and other European sockets/points, including the ground/earth connection. Some multi-adapters work in up to 150 differernt countries. This is your most useful solution for your charging station (see below), because it's solid and secure in the wall outlet/point.

If you're like most travelers on a trip to France, you've got several electronic devices to charge each day.

Your French hotel room may have only one electrical outlet, and that in an inconvenient place. Usually, though, there are more outlets than one, and they aren't all near the floor behind the bed, so if you have a plug adapter you can charge one device.

That's 9 devices in all!


When we arrive in a hotel room, we set up a charging station using a power cord splitter or a power strip.

A power cord splitter (or power splitter cord) is an electrical wire with a North American plug at one end and two or more North American sockets on separate wires at the other end. Plug the splitter into an adapter in a French outlet, and you've got several independent sockets in which to plug your numerous electrical devices.

Power cord splitters.
Click on the photo for more information.

A splitter is particularly useful if your devices have extra-large plugs or transformers: there's plenty of room on each independent socket. (This is an advantage over a power strip—see below).

Plug a second splitter cord into one of the sockets and you can have up to seven sockets available; or use the two splitters in different locations in your hotel room or apartment.

A power strip (or power tap) is a device providing multiple sockets/outlets (usually 6 or 8) connected to a cord with a plug on the end. Several devices can be plugged into the power strip. When the plug on the cord is plugged into an electrical outlet, all of the sockets receive electrical current. In effect, a power strip turns one socket/outlet into 6 or 8 sockets—which is what travelers need these days.

Simple power strips/taps—no surge protector circuitry.
Click on the photo for more information & where to find them.

We learned this the hard way. The explosion wasn't all that dramatic, but it destroyed the surge suppressor, and thus we didn't have the use of it for the rest of our trip. It was junk. We threw it away.

Hardware and electronics stores usually display many more surge supressors than simple power strips, so shop carefully. Look at the label on the unit itself. If you see the term surge supressor or surge protector on it, and the rating of 110-120 volts, do not use it in France (or in any country that provides 240-volt, 50-Hertz current).

A simple power strip merely connects several plugs to one socket. It contains no electronic circuitry to detect or suppress surges, but in my experience power surges are not a big problem in France. 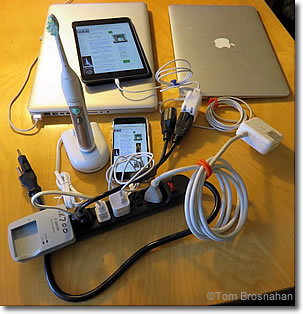 
Power strip with 4 USB charging ports & 3 North American 3-prong plug sockets—and NO surge protection. Rated at 100-240 volts AC, 50/60 Hertz, it's suitable for both North American & European use, so long as you don't need to plug bulky transformers into the main outlets.
Click on the photo for more information.

For more information, and where to buy adapters, power strips and more, click here.

Power cord splitters and power strips may come with short plug cords, and we often find that we need an extension cord to position our charging station conveniently because power sockets/outlets in French hotels and apartments/flats are not always in convenient locations.

It's worth it to carry at least a 1- or 2-meter (3- or 6-foot) three-wire extension cord to run from the wall outlet to the horizontal surface where you position your charging station and all your electrical devices. (Why three-wire? Because your power cord splitter or power strip will have a three-prong plug on it.)

Click on the photo for details & how to find it.

Consider a longer extension cord—or two of them, especially if you plan to stay in mid-price, budget or historic hotels, B&Bs, or apartments/flats. 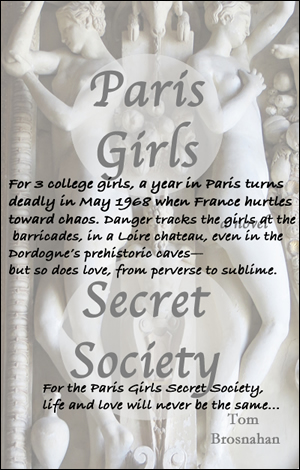