You can travel between Aéroport Paris-Charles-de-Gaulle (CDG) and central Paris by train, airport bus, taxi, limo, or shuttle van. You can also take a fast TGV train right from the airport to many cities in France and beyond.

Money for Your Ride

Except for private transfer, which you book online before you arrive, you may need cash euros to pay for your ride to the city center via RER-B train, RoissyBus, Le Bus Direct airport bus, or taxi (see below).

If you reserve a private transfer online before flying, your trip into Paris will be all paid—no need for cash.

Exchanging currency at airports is almost always a huge ripoff, and CDG is no exception. The currency exchange booths (Travelex) and ATMs at the airport use exchange rates much poorer than ATMs in the city center, then pile on fees and charges and tricks like "dynamic currency conversion," so that in the end you may pay 10% to 20% for the exchange, receiving as little as US$80 in euros for the US$100 you pay. (Exchange rates and fees at your departure airport near home are even worse.)

You may be able to use your credit or debit card to pay—or maybe not. Here's all the info: 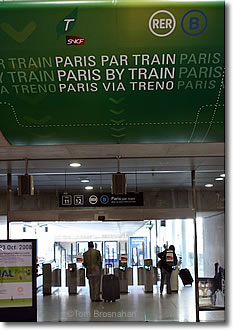 Paris by Train: fastest and nearly the cheapest. 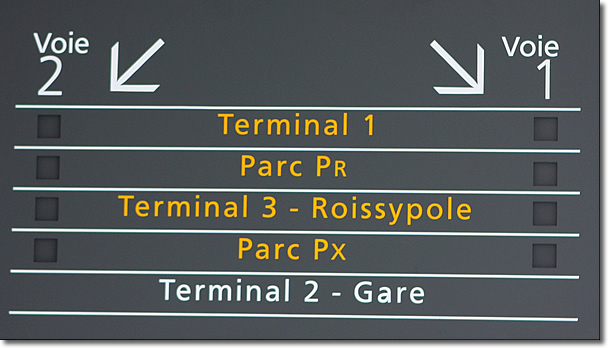 If we going to travel by car-and-driver from Charles de Gaulle Airport into Paris, we prefer a private transfer service to a taxi:

The most comfortable and hassle-free way to go is with a private airport transfer. Sixt, the German car rental/hire company, offers an excellent airport transfer service called MyDriver: you book your transfer online, your driver meets you at the airport arrivals area holding a sign bearing your name, helps with your luggage, and drives you in a late-model German car or van to your destination. It's particularly convenient and good value for groups of three to five travelers.

Taxis from CDG to central Paris are required to charge regulated fares. The safest and best way to go by taxi is to reserve your taxi in advance (for up to three passengers). You'll know the price and where to meet your driver in advance, and you'll go straight to your hotel.

If you fail to book in advance and must find one at the airport, only use an official taxi! You may be approached by men in the terminal asking "Taxi?" Even if they look "official," ignore them! They are not authorized. Look for official drivers in numbered blue vests and the official taxi rank, Taxi Officiel Aéroport, and take a taxi dispatched from there. Don't end up like the Thai couple who were charged 247€ for a 55€ ride into the city—the driver of the unofficial taxi wouldn't unlock the doors and let them out of the car until they paid.

Trains to Paris & Beyond

The RER Line B suburban train takes you from Paris-Charles de Gaulle (CDG) Airport to central Paris in as little as 35 minutes. It is the fastest and almost-cheapest way to travel, in adequate comfort when it's not crowded, even if you have a lot of luggage.

Starting from CDG Airport, you're very likely to get a seat. Returning from Paris to the airport...maybe. (If you have lots of luggage, you may want to consider an alternative means of transport to return to the airport.)

RER B trains don't have to contend with Paris's horrendous highway traffic, which can turn a 45-minute airport-to-city trip into a 2-hour nightmare.

The RER Line B also takes you to Orly Airport south of central Paris. Ride to the Antony station, then take the OrlyVal shuttle train direct to the terminals at Orly in six minutes.

If your destination is not central Paris, you can take a fast TGV train right from CDG Airport to go where you wish.

Located between Terminals 2C and 2E, this is the airport's main train station. Follow signs for Paris par train (Paris by train), Trains, Transports, Gare, or Gare SNCF to reach Aérogare 2. The signs may lead you first to the CDGVal airport shuttle train (see above), which will take you to Aérogare 2.

RER B Trains to Paris

Aérogare 2 is the northeastern terminus for the RER Line B suburban trains to Paris and to Orly Airport. Tracks/platforms (voies) 11 and 12 serve these trains, all of which go to central Paris—so you can't board the "wrong train" on these tracks. Just pass through the turnstiles marked Paris par train (Paris by train).

The other part of Aérogare 2 serves SNCF TGV main-line (grands lignes) trains to other parts of France and Europe.

This station in the Roissypôle complex near Terminal 3 (a 5-minute walk) and the airport's bus terminal (2-minute walk), serves only RER Line B trains to/from Paris—no trains to anywhere else.

Airport buses, slower than the train, make the most value-for-money sense for single travelers and perhaps some couples, depending on your destination and luggage. If your travel party is four or more people—or maybe even three—other options such as private transfers and taxis offer better value for money, as four bus fares may approach the cost of traveling by taxi or private car-and-driver.

A service of RATP (the Paris public transport company), the RoissyBus airport bus takes you nonstop from Charles de Gaulle Airport to the Opéra Garnier at Place de l'Opéra in the heart of Paris, whence you can continue to your hotel by Métro, city bus, taxi or on foot. It's about as comfortable as Le-Bus Direct, and as long a ride through the same Paris traffic. If you're a single traveler, or two, and your destination is near the Opéra, it's the obvious choice.

Also operated by RATP, this slower, cheaper standard city bus travels between Charles de Gaulle Airport and Paris's Gare de l'Est, where you can connect to the Paris Métro and city buses to continue to your destination.

You reserve your seat in advance. When your flight lands you call a toll-free number to learn the pick-up location, and the shuttle van takes you to your hotel.

This makes the most sense for single travelers who want to pay less than taxi fare and still go to their hotel without changing modes of transport.

Of course you can easily rent/hire a car at CDG, but we don't recommend it. If Paris is not your destination, it's easier to take a train or bus to a town outside Paris and rent/hire there, avoiding the intense Paris-region traffic (especially the insane motorcyclists!) and highway confusion. Every train station in every town of any size has car hire/rental offices. You may even get a better car. Click on the button for more info: